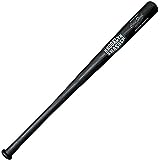 “It’s unbelievable. We’re seeing eight to 10 bats break every game. Guys are coming back saying they hit the ball on the sweet spot and it still broke.” This quote caught Cold Steel’s President, Lynn C. Thompson’s attention. It was from an news article in the LA Times describing how frequently baseball bats break and injure the players in major league games. The article chronicled the debate currently taking place among players over which bat is better, those made of ash, which is lighter and slightly flexible, or those made of maple which is heavier and stiffer. As he read, Cold Steel President Lynn Thompson began to suspect there might be a market for a baseball bat that just couldn’t be